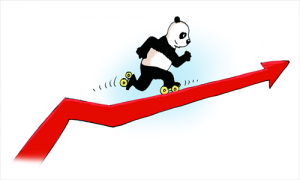 Institutions, hedge funds, businessmen and ordinary citizens who buy shares and actively participate in stock markets expect to have quicker and higher profits than deposing their money in bank accounts. This is a fair economic logic that might bring tangible results but one which could be also dangerous. Hedge funds have often the ability to get in and out before others defining the market course and leading other investors to either act under pressure or suffer serious losses. It is here where speculation happens and where relevant authorities have to establish an efficient supervision.

The story of the Chinese stock market volatility involves speculative elements reflecting the will to easily earn ‘hot money’. Within this context, prices have been overvalued generating the recent sell-off process. The Chinese government is now facing a serious challenge to act preventively against potential speculation, minimize the risk of rogue-trading and offer a protection network for future investors.

On the whole, the course of a stock market is also relevant to economic developments within a state. This is arguably the case with China as the country finds itself in a process of transformation and adjustment to the so-called ‘New Normal’ and no longer enjoys the double-digit growth rates of previous years. Some pessimistic thinkers in the West believe that China is facing a profound crisis that even threatens world financial stability.

However, apart from some negative media comments, European politicians and economists show confidence in China. German Chancellor Angela Merkel and French President Francois Hollande, for example, recently discussed the fall in Chinese stock market and shared the view that Beijing had the ability to control the situation. Additionally, they focused on the solid nature of the global economy to have a growth perspective and held the position that China might also critically contribute towards this direction.

In parallel with Merkel and Hollande ECB vice-President Vitor Constancio plays down concerns. He refrains from using the lemma ‘crisis’ and asserts that the Chinese stock market was not decelerating so much to justify the rout in the stock market. On the same wavelength, former Director of the IMF Fiscal Affairs Department Carlo Cottarelli considers the sharp fall as a ‘necessary’ adjustment.

Confidence shown by European politicians and economists in China is mainly based on two pillars. The first is that the market correction will finally give an end to previous unsustainable rates. And the second is that the slowdown of the Chinese economy is not an unexpected crisis but a rational policy aiming at achieving specific targets. In the final account, growth rates do not largely divert from official government goals as the transition to the ‘New Normal’ stipulates.

A comprehensive analysis of this concept requires some patience on developments such as the evolution from a command towards a market economy and a conscious liberalization. Even European countries, which enjoy strong trade connections to China and have seen their markets falling, might see less immediate demand of their exports but an increase in the long-term. That is because China seeks to continue market-oriented reforms in order to be able to expand import and external investment in the future and make thus a bigger contribution to the growth of the world economy.

All in all, the slowdown of the Chinese economy can hardly justify concerns and explain the fall of the stock market. Speculation and the necessity to take preventive measures against rogue-trading should not be confused with natural consequences of the adjustment to the ‘New Normal’.