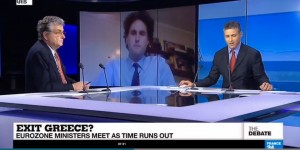 Giving an interview on France 24 and journalist François Picard , Dr George Tzogopoulos analysed negotiations between the Greek government and its creditors. In so doing, he commented on the rumors for a potential economic co-operation with China and Russia suggesting that these countries are not prepared o give presents to Greece. By contrast – Tzogopoulos suggested – they want Greece to remain in the eurozone in order to. have more opportunities for investments.