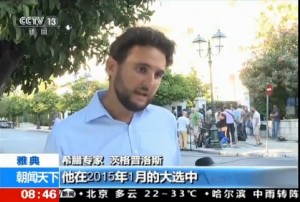 The China Central Television (CCTV ) extensively covered the decision of Greek Prime Minister Alexis Tsipras to resign. In that regard, CCTV interviewed George Tzogopoulos who interpreted the decision of the Greek Premier as an effort to speed up a snap election before his SYRIZA party starts to become seriously damaged by implementing bailout terms. In the view of Tzogopoulos, even after the new early election Greece will need a coalition government.

The interview is available here (in Chinese).