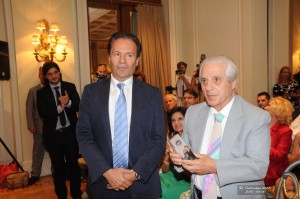 On Wednesday, July 1, the “Diamonds of the Greek Economy 2015” award ceremony was held in the Grande Bretagne Hotel. The event, which recognises the country’s “diamond businesses”, was attended by representatives of the majority of the Greek business world.One of the companies to receive an award was the leading Greek pharmaceutical company, VIANEX SA, and the presentation of the honorary award to the “founding father” of the Greek pharmaceutical industry, Paul Giannacopoulos, the founder and president of the company, was a particularly moving moment. The award was presented by the president of the Panhellenic Union of Pharmaceutical Industry, Theodoros Tryfon.

The award was received by the vice president of the VIANEX Board and deputy CEO of the company, Dimitris Giannakopoulos, who started his speech by expressing his thanks to the 1,200 employees of the company for their contribution to VIANEX’s work which has treated “generations upon generations” of patients. As part of his speech he stated: “I would like to thank you for this honor. It is a great joy for VIANEX and for the Giannakopoulos family to be involved for many years now in the important effort made by Active Business to promote healthy entrepreneurship in Greece.”