Cooperation with China enhances the position of Greece within the EU 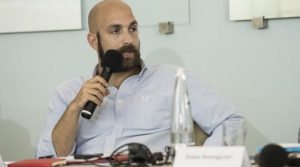 The inability to foresee the election result in recent years has reduced the reliability of mainstream polling companies in Greece. One of the few exceptions in making correct predictions is the research center “Bridging Europe”. Based in Brussels, Bridging Europe, correctly anticipated the result of the four latest elections in Greece, including the referendum and the range of SYRIZA’s victory in the election of September 2015. The founder of the Center, Mr. Dimitris Rapidis , who is a political analyst and communicator, talks to chinaandgreece.com on the emerging political situation as well as on relations between Greece and China and the BRICS.

Unlike most polling companies, Bridging Europe predicted correctly. Where do you attribute this success?

The relevant success of our predictions in political contests and the referendum is a product of reliability and methodology. The team of Bridging Europe leverages and continuously evaluates the tools used for surveys in order to find a relatively representative sample at specific periods of time and also to study the conclusions reached in the long term in a series of thematic questions and public policy choices.

How do you assess this time the political landscape in Greece, among others concerning the ‘voting intention’ question?

Two of the key features of this period – generally starting in January and ending in June 2016 -is on the one hand the escalating concern of voters about the course of the economy, and on the other one the faith of a large part of the electorate in the government’s effort to manage the economic crisis. At first glance, these two elements might seem contradictory but are influenced by a third, dependent variable, which is the fatigue caused by the maladministration and the high number of complex scandals that have marked the political and economic life of the country since the 1980s, with special emphasis on period between 2008-2016.

As far as the ‘voting intention’ is concerned, SYRIZA maintains the lead from September 2015 until to June 2016 despite its poor political gathering percentage and the high number of undecided voters. The opposition parties, except for the Communist Party and the Golden Dawn, do not positively capitalize in the context of the concern of the society about the economy or the potential damage of the government.

How do you assess relations between Greece-China and the country’s possibility of attracting new investments after the Prime Minister’s visit to China?

Greece and China have had a close relationship, at different levels and in several political fields of cooperation. The deepening of relations is necessary for both sides. Common benefits for both sides gradually become apparent. The Greek government has invested in trade and economic relations with China and attempts to focus on specific fields where opportunities arise and a room for cooperation exists. The good level of cooperation with China enhances the country’s position within the EU and strengthens the argumentation that large-scale investment initiatives are undertaken by third non-EU countries. Former locomotives of the ‘European economy’, namely France and Germany, only deal with the management of the failed Stability and Growth Pact and on how to preserve the EU and  the nature of the eurozone as a space of conservative and ultimately unbalanced economic transactions.

Can Greece benefit by its cooperation with the BRICS?

Greece must always build cooperative relations with third countries, especially with those geopolitical actors who have a say and power in the multipolar system of governance, such as Russia, India and China. The deepening of bilateral relations with each of those countries individually would be beneficial for Greece, both economically and politically. As long as there is consistency, duration, and a clear strategy, such as policy will yield positive results.