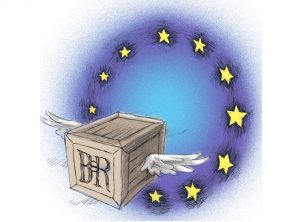 Relations between China and the European Union are developing fast. The EU constitutes the biggest market for China and China is the second biggest one for the EU. The 2020 Strategic Agenda for Cooperation functions as the institutional platform for collaboration between the two sides on peace and security, prosperity, sustainable development, and people-to-people exchanges.

More importantly, the implementation of China’s Belt and Road initiative, which fosters connectivity in the Eurasia region, is continuously creating new opportunities. In 2015, for instance, China became the first non-Western country to participate in the European Commission’s €315 billion ($375 billion) investment plan set up by its President Jean Claude Juncker.

Recently, the impact of Donald Trump’s policies on world affairs is causing a vacuum which might be filled by other powers such as China and the EU. There is no better example than the shared commitment of Beijing and Brussels to keep the Paris agreement alive after the US president announced the withdrawal of his country. This commitment was outlined during the 19th summit organized in the Belgian capital.  However, the partnership between China and the EU has also encountered challenges. One of the most significant problems was the EU’s decision to deny China its market economy status, which has fueled serious disagreements. This decision intensified a pre-existing debate on the future repercussions of China’s involvement on the Old Continent.

The ongoing criticism has two main pillars. The first is relevant to economics. Acquisitions of European companies by Chinese ones as well as the export of cheap Chinese products like steel has alarmed some European industries and this concern has been reflected lately in the stance of leading EU countries, namely Germany and France.

The second pillar is interwoven into politics and questions the conduct of China’s foreign policy toward the EU, as well as to individual European countries. German Foreign Minister, Sigmar Gabriel, was vocal about this a few days ago. Speaking at the German Embassy in Paris, he said that “if we do not succeed, for example, in developing a single strategy towards China, then China will succeed in dividing Europe.” His comment mainly referred to China’s so-called “16+1” approach, Beijing’s willingness to establish close ties with countries in the Balkan Peninsula and in Central and Eastern Europe.

The Chinese foreign ministry did not hide its shock at Gabriel’s statement. And the ministry’s response to the comments concentrated on China’s steady support for European integration. As a matter of fact, Beijing has been very concerned about the future of the EU since the outbreak of its economic crisis in 2008.  On many especially difficult occasions for the integrity of the eurozone, China publicly advocated the avoidance of decisions with unknown consequences, namely Greece’s proposed exit from the common currency area. Even before the UK referendum on EU membership, China made it clear it preferred a “yes” vote for Britain in order to guarantee continuity.

Looking carefully at Gabriel’s recent comments, however, he seems to have provided an explanation himself. The failure of the EU to speak with one voice regarding China, as he noted, reflects its general weakness in the EU member state’s ability to shape a common foreign policy (but this would come as no surprise to people familiar with European affairs.) With special reference to China, this failure equally demonstrates that several European countries are positively predisposed toward Chinese investments, which often are no longer financed by the EU itself yet are viewed suspiciously by the European Commission.

Germany, as the economic locomotive of the EU, refrains from directly supporting growth through relevant economic measures. By contrast, it expects growth to be achieved via structural reforms.  But certain societies and many of the younger generations of Europeans do not necessarily have the patience to wait for long-term results while enduring economic hardships. They are looking for immediate results to improve their living conditions. Naturally, there are many European politicians who are, at a national level, embracing alternative routes to enhanced prosperity such as the Belt and Road initiative.

It is better to look at the reality than to attempt to distort it. China is not dividing Europe. China is approaching a divided Europe and exerting its economic and foreign policies accordingly. This resulting situation should not be linked with its deeper causes.