China and Greece on the same Belt and Road 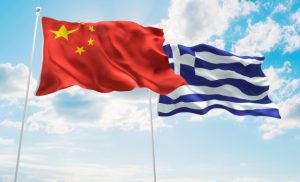 For approximately eight years Greece has been continuously stigmatized in the international media discourse. The outbreak of its economic crisis in 2009 has led journalists from all over the world to focus on its pathogeneses and illustrate them as the main reason for its own problems almost leading the country to a disorderly default. Unsurprisingly, Greece’s public image has been tarnished. Part of the reporting is accurate indeed. Nevertheless, some stories tend to exaggerate and therefore construct – deliberately or not deliberately – a different reality.

A relatively new frame in the international coverage of the Greek crisis is that of geopolitics. Being under extreme pressure to reduce the budget deficit and comply with the terms of the European rescue mechanism providing loans to eurozone bankrupted economies, all Greek governments since 2009 have been obliged to take austerity measures. These austerity measures include cuts in the military and foreign policy sector. Furthermore, Greek governments have lost – to a large extent – their ability to act independently as the majority of their decisions need to be approved by its partners.

Under these conditions, some international media believe that Greece can be vulnerable to economic interests of non-Western countries in its attempt to escape from the nightmare of its supervision and return to growth as soon as possible. At first it was Russia coming under scrutiny and recently it is China. The implementation of the Belt and Road Initiative has generated an intense debate in Europe and the U.S. – reflected in the media discourse – on what China’s motivations are or could be in the future.

The simplistic argumentation goes as such: With its liquidity China is able – through its state own enterprises – to participate in international tenders and make investments in exchange for support for its policies. This theory perfectly fits in the case of Greece for the reasons already analyzed and because the country needs to carry out privatizations in order to meet its bailout requirements.

A recent veto exerted by the Greek government, which prevented the European Union from condemning China for its human rights record, was the best pretext for advocates of the theory to feel supposedly vindicated. A closer and inside look at the evolution of Sino-Greek relations leads to a different conclusion though. The “win-win” character of Chinese investments in Greece is not a firework but a fair assessment. While Beijing is implementing its Belt and Road Initiative, Athens can count on some cash and more importantly on additional business deals which are following the initial investments themselves. Here, companies from other countries benefit. Hewlett-Packard (HP), for instance, cooperates with COSCO Shipping and the Greek Railways from the moment the Piraeus port started to become a trade hub in the Mediterranean.

In parallel with this approach, China is negotiating no secret deals with the Greek government to construct infrastructure works. Its companies sign contracts only when they make the highest bids in public competitions. This is how COSCO entered the Piraeus port in 2008 and 2016 and this is how China’s State Grid completed the purchase of Greece’s power grid operator, ADMIE, last June.

Also, on the occasion of Prime Minister Alexis Tsipras’ attendance of the May Belt and Road Forum for International Cooperation, Copelouzos Group and Shenhua Group reached an agreement, which will be the beginning of their energy cooperation, if they win a relevant tender in the future. Companies from all over the world can also submit offers. Competitions are free and there are no obstacles to the process imposed by either Greece or China.

From another perspective, to link China’s business presence in Greece with the alleged exerting of diplomatic pressure from the former to the latter fails to take into account the course of developments. It is rather Beijing which is interested in investing more than Greece pushing towards this direction and needing to bargain. The current Greek government is ideologically opposed to privatizations and almost led the Sino-Greek partnership to the brink of collapse in the first months of 2015 when it was targeting all foreign investors by focusing on the public nature of state owned enterprises in the country.

Certainly, an allergic to privatizations government has no will or reason to embrace China’s interests in order to receive its cash. Additionally, it is not fair for Chinese companies – mainly COSCO – to be blamed for offering low salaries to port workers. People familiar with the matter very well know that numerous port workers used to enjoy unbelievable privileges by the Greek state for many years and that COSCO only adjusted salaries to private sector standards in Greece. Further to this, some data often omitted in the Western media discourse is that after the privatization of the Piraeus Port Authority in 2016, the new management only appointed 8 Chinese employees while all 1,087 Greek employees kept their positions. Last but not least, a recent poll demonstrates that 70 percent of respondents in Greece are positively disposed towards China and 71 percent vis-à-vis Chinese people.

All in all, Greece and China are on the same Belt and Road. Harmonic cooperation cannot be interrupted or blocked by some negative media stereotypes. What matters more is not what some journalists report but how stable are the foundations of the partnership.