Developments in South China Sea from a Chinese perspective 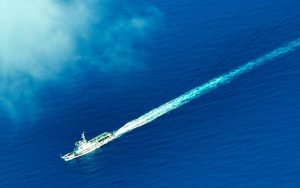 By Zhang Rui & He Shan

Compared with the United States aggressive actions in the South China Sea, China has only constructed several military structures on the artificial islands for self-defense due to the chaotic and challenging situation in the area. ‘We made a few reasonable deployments within our own sovereignty. This is our job and is in accord with international laws. We never harm other countries’ interests,’ Qian said.

‘Most structures on the artificial island are for civil use, such as navigation, meteorology, environmental protection, scientific research, aid for fishing boats and so on,’ Ambassador Cui said. ‘But why doesn’t the United States pick on the other 42 islands which belong to us but are occupied by other nations? They also built airports, deployed armies and missiles. The United States wants to deploy 60 percent of its maritime and air forces in the Asia-Pacific areas by 2020, and it has many military drills with various countries here. So, it can’t only claim that China is militarizing the area. It should also explain what it has done.’

Huang Youyi, the former vice president of the China International Publishing Group (CIPG) and executive vice president of the Translators Association of China and a CPPCC member, said he understood that there has always been the ‘China threat’ theory and it is impossible to turn this view around in America, Japan and other Western countries concerning many of the so-called China issues, including the South China Sea controversies. However, he said that China should explain itself in every big forum and summit led especially by the United States when we have the chance. ‘I remember I was attending an international think tank summit in Milan, Italy, where American and Japanese representatives criticized China regarding the South China Sea,’ he said. ‘Then I told them, they have nothing to do with the issue. China is also protecting the South China Sea’s crude oil transportation line, which benefits Japan’s economy. After I finished speaking, the Japanese representative didn’t fight back.’Whatever you do, America will not be satisfied,’ he added. ‘It just can’t stand the idea of another country which could challenge it in the world. We have to prepare for this situation to last a long time.’

Qian Lihua believes that China is no threat to the United States, but very good for the development of America’s society and economy. ‘The two countries have enormous trade relations. I can’t imagine the two would end up as enemies. However, China is paying attention to America’s provocation in the South China Sea, and our army will take responsive measures. If America insisted on complicating the situation, any incident is possible.’ Cui Tiankai hopes America will not join in the disputes in the South China Sea as it has no territorial claims there, ‘or its actions will have inclinations.’ He also noted that most ASEAN countries are also hoping China can create a dialogue with certain countries which made claims to resolve the problem as they don’t have conflicting interests with China regarding this issue. ‘China has signed a Declaration on the Conduct of Parties in the South China Sea with ASEAN countries in 2002,’ added Cheng Yonghua, China’s ambassador to Japan and a CPPCC member. ‘They are currently negotiating on the South China Sea code of conduct. America and Japan should stop their actions which may increase the situation’s intensity.’

In the latest development, China will establish an international maritime judicial center in its latest bid to protect national sovereignty and maritime rights, a report from the Supreme People’s Court (SPC) said on Sunday. Courts across China will work to implement the national strategy of building the country into a ‘maritime power’, according to the report delivered by Chief Justice Zhou Qiang at the annual session of the national legislature. ‘(We) must resolutely safeguard China’s national sovereignty, its maritime rights and other core interests.’

Han Fangming, vice chairman of the Foreign Affairs Committee of the Chinese People’s Political Consultative Conference (CPPCC) National Committee and chairman of the Charhar Institute, a nongovernmental think tank, thought further. He suggested that Yongxing Island, the largest island of the Xisha Islands group in the South China Sea, should make use of its geographical advantages to offer offshore company registration services and offshore financial services. Promoting offshore services there will be a boon to local economic development and act as a safeguard to national interests, Han said. ‘This is not a military action; this is an economic activity. When we make it an offshore company registration location, we will win recognition from all over the world. This would be very significant.’