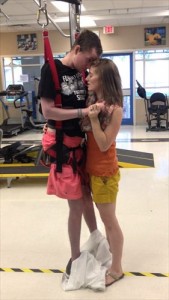 2015 witnessed tragedies, violence and bloodshed but we always have faith in humanity for those glimmering moments from common people. Global Times newspapers presents 10 small heartwarming moments. In this picture, a quadriplegic man named Joel Jackson shares the first dance with his wife Lauren on 1 October 2015  six years after a car accident left him paralysed. The couple, from US, started dating in 2012 and got married in 2013.

You can see here the other nine Global Times moments.