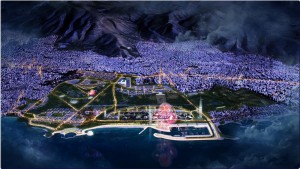 On Tuesday 7 June 2016 a Memorandum of Understanding was signed between the Hellenic Republic Asset Development Fund SA, HELLINIKON Global I. S.A. and Lamda Development S.A. This Memorandum amends the existing Share Sale and Purchase Agreement of HELLINIKON S.A. of 14.11.2014, in which important technical features of the Hellinikon former airport’s redevelopment are delimited so that the Project is fully aligned with the expectations of the citizens, the local communities and the wider region of metropolitan Athens. The redevelopment of the old Airport by Lamda Development S.A. is supported by the Chinese company Fosun and Abu Dhabis Al Maabar.

The June 2016 agreement, which specifies all the basic design requirements and economic parameters of the Project is a milestone because it provides the opportunity to accelerate all procedures for commencing the project that will become the largest urban regeneration throughout Europe for the coming years. The project is a model urban development which will respect the urban and environmental balance, will disseminate the benefits to larger areas of the Attica Basin and will be characterized by versatility both in terms of the balanced mix of land uses and in terms of the creation of a Metropolitan pole accessible to all citizens. The basic design includes the upgrading of the beach, residential developments, superregional and local commerce, hotel facilities and recreational areas, utilization of the Olympic facilities and the creation of new sports facilities, a new golf course, venues that highlight our cultural heritage, educational facilities and research centers etc.

Moreover, within the Project’s framework the investors undertake the creation, financing and maintenance of the largest Greek, and one of the largest in the world, Metropolitan Green and Recreational Park, which jointly with the public use green areas of the site will cover and aggregate area of 2.600.000m2, that is 42% of the entire site. The investors undertake the financing and construction of all transport infrastructure, public facilities and utilities networks, all necessary port works, the creation of 50klm of sidewalks and bicycle paths which will create the necessary connection with the existing and the new rail networks, the underground routing of parts of Posidonos Avenue, the renovation and operation of all listed buildings within the site, as well as the creation of a 1 kilometer beach with free-access to the public. The development is expected to have a frontloaded positive effect in the fight against unemployment with the creation of 10.000 direct jobs and the resurgence of the construction sector which has been severely struck during the years of the prolonged economic crisis. At full development the Hellinikon project is expected to employ approximately 70.000 people of many professional disciplines.The Projects’ contribution to the Greek GDP is expected to reach 2%, securing significant income for the Greek State and Social Security, which in the span of 25 years, is expected to reach cumulatively €10 billion. The Project’s positive impact in the country’s tourism is significant with an expected additional increase of 1.000.000 tourists per annum.

Welcoming the agreement the President Mr. Tassos Giannitsis and the C.E.O. Mr. Odisseas Athanasiou of Lamda Development S.A. stated the following: “This is an important step towards the direction of investment, employment, exploitation of new opportunities and of attracting international capital in the country. The Project will have multiple positive effects on other sectors and activities, it will create new expertise and a very large area will gain immense utility value for millions of Greek and foreign citizens. Most importantly, this investment due to its size and qualitative characteristics, will install an important development axis in the economy of the country, and especially that of the Attica basin, which will become a reference point for many decades”.