Much promise in Sino-Turkish relations 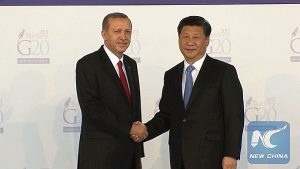 In China’s current approach to the Mediterranean Basin, Turkey is particularly significant. Its geographical position along with the economic opportunities it offers obviously makes the country part of the Belt and Road Initiative.

The good climate in bilateral relations is highlighted by several high-level meetings. Turkish President Tayip Erdogan, for instance, travelled to Hangzhou for the G20 Summit in September 2016 and to Beijing last May to attend the Belt and Road Forum for International Cooperation. This gave him an opportunity to talk with his Chinese counterpart Xi Jinping.

Meanwhile, Chinese Vice Premier Liu Yandong visited Ankara last April and met with both Erdogan and Turkish Prime Minister Binali Yildirim. Another important meeting took place in Beijing only a few days ago, when Turkish Foreign Minister Mevlüt  Çavuşoğlu paid an official visit ahead of the ASEAN Manila Summit. Çavuşoğlu sought not only to contribute to the advancement of Sino-Turkish relations but also to ease Chinese concerns on a longstanding political issue.

Having often suffered from terror activities perpetrated by Uyghur militant groups for a long time, China has been pressing Turkey to change its tolerant attitude towards ethnic Uyghurs. It seems this diplomatic effort has been successful. While in Beijing Çavuşoğlu stressed his country’s new commitment to security ties with China by saying: “We see China’s security as our security” and “We do not permit any negative actions against China in our country or region.” He also pleased his counterpart Wang Yi by strongly supporting the “One China Policy.”

Hence, prospects are bright, especially if political disagreements are bridged. According to data provided by the Turkish Ministry of Foreign Affairs, the bilateral trade volume rose from $24.16 billion in 2011 to $27.76 billion last year. China is Turkey’s second largest trade partner globally after Germany, although it is only Turkey’s 19th largest export destination, while being the largest importer of Chinese goods.

Since the end of last year, the two countries have started direct trading in their own currencies. Actually, the respective central banks had signed a swap agreement in 2012 that was renewed in 2015 for another three years. The main aim is to increase the trade volume, help business deals between small and medium-sized enterprises by reducing exchange costs and curb dependence on the U.S. dollar in financial transactions. So, the trade figures should reach new heights this year.

Moreover, as far as investments are concerned, China’s accumulated direct investment in Turkey increased from $509 million in 2015 to $809 million in January 2017 alone. Energy, infrastructure, transportation, logistics, finance, and telecommunications occupy the lion’s share. That number can only rise, for example, Turkey has published in its official gazette a deal with China for cooperation in the peaceful use of nuclear energy, possibly paving the way for the latter to build third Turkish nuclear plant. Meanwhile, China Railway Construction Corporation and China National Machinery Import and Export Corporation have been involved in building high-speed railways in Turkey.

Ankara places much emphasis on Chinese investments in its effort to escape international isolation, stabilize its national economy and look for new financial sources after the failed coup of July 2016. More importantly, the Belt and Road Initiative can intersect with Turkey’s “Middle Corridor” project. Two years ago, Erdogan talked about their compatibility and in November 2016 a memorandum of understanding on harmonization was signed.

During the May Beijing Forum, the Turkish president reiterated Ankara’s support for the revitalization of the ancient Silk Road. He referred to the operation of the Baku-Tbilisi-Kars railway project within this year and Turkey’s participation in the Asian Infrastructure Investment Bank (AIIB).

All in all, the partnership between China and Turkey is gaining momentum. Overcoming political obstacles, the two sides can move forward with cooperation going beyond security and economics. More Chinese tourists are expected to visit Turkey this year, and a Turkey tourism year is planned in China in 2018, promoting more bilateral people-to-people exchanges and establishment of cultural centers.

The influential Turkish newspaper Hurriyet anticipates a million Chinese travelers to visit the country next year. This is how the younger generations will be mobilized to learn more about China and Turkey respectively.