New book on the power of China 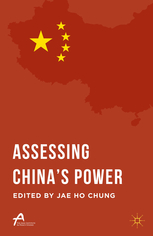 The new book Assessing China’s Power published by Palgrave-Macmillan examines the rise of China and its impact on global and regional order. The book is edited by Jae Ho Chung, a distinguished professor of International Relations at the University of Seoul, and constitutes a collaborative work. In the last decades, China has been transformed from a developing country to a global power. The main feature of its power is the dominant position China possesses in the international trade and financial system. At the same time, the economic development has also acquires a significant political and military nature, changing the balance of power in the Asia-Pacific region.

The principal objective of this book is the analysis of several aspects of Chinese power as well as of the unique features which make the country one of the global powers of the international system. In the first part of the book, the main internal sources of power are being presented, specifically the economic and administrative capacities. François Godement writes about the impressive growth of China, which constitutes the main reason for the rise of China in the contemporary international system. Also, Tony Saich discusses the challenges that China has to face in order to improve it’s administrative records and capabilities.

The second part of the book is synthesised around the military power of China. Andrew Erickson analyses the aspects of the conventional military power of China and pays attention to the changes of the Chinese navy and the Chinese air force. According to Ericson, the operational improvement led to the equivalent rise of the Chinese geopolitical ambitions in South and East Asia. Moreover, the evolving nuclear capabilities of China is explored in the chapter authored by Michael Chase. He refers to changes occurred and how they might modify the increasing arms competition in the region of East Asia. In addition, Kevin Pollpeter  presents the recent actions of China in space, in cyberspace and also in the interstate competition in the two poles. The above actions are the efforts of the Chinese leadership  to make China a military and technological power, capable to compete with other strong military powers.

In the third part of the book, Anne Kent and Hankwon Kim elaborate on the main aspects of the normative and soft power of China in the international system. Kent focuses on the normative strategy of China in the interstate system and Kim analyses on increasing importance of the norms and rules in the global strategy of the country. In the fourth part of the work, David Kang and Evelyn Goh write about the regional impact of the Chinese power in Southeast and Northeast Asia. East Asia is the main field of the development of the Chinese ambitions as the country has concluded an amount of bilateral and multilateral agreements in the region.

In the fifth and last part of the book, Shaun Breslin, Suisheng Zhao and Zhimin Chen assess the role of China as a global power.  Breslin analyses the transition course of China as a global power and also the challenges it is eoncountered with in order to maintain the dominant position in the system. Zhao writes about the Chinese view  on the matter. Last but not least, Chen explains the Chinese position regarding the shift of the country from the global periphery  to the power center of the contemporary international system.