The EP wants China to align with WTO practices 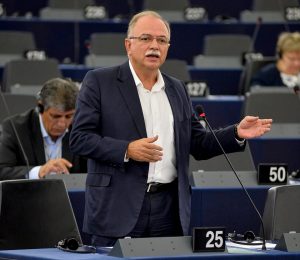 Vice-President of the European Parliament and head of the SYRIZA party European delegation, Mr Dimitris Papadimoulis, gives an interview on chinaandgreece.com in which he discusses the current status of Sino-European relations and the role of Greece in this bilateral relationship. In particular, he analyses the main challenges of the strategic co-operation (the debate over China’s MES) but also rising opportunities.

In May 2016, the European Parliament passed a non-binding resolution calling on the European Commission not to recognise China’s MES. What were the reasons for this decision?

China, like any other country, has the right to want its MES to be recognised. Issues related to labour relations and dumping do not facilitate the healthy competition of products and goods and have to be reviewed by the Chinese leadership. The European Parliament has every reason to desire the alignment of China with common practices under the WTO and the EU. Relevant privisions and agreements have to be respected though.

China is a strategic partner of the EU and cooperation should be mutually beneficial. It will be highly important for the success of this collaboration if a fair framework for European industries and the protection of jobs is ensured.

How do you assess the strategic partnership between the European Union and China? Do you believe some changes are needed?

China, as I have already mentioned, is a strategic partner of the EU and the volume of bilateral trade is continuously increasing. Important issues such as the recognition of China’s MES are still pending but I believe that we are on track. Both China and the EU acknowledge the significance of the mutually beneficial partnership which is growing in a multipolar and fragile political and economic environment. The finding of common priorities and steps at all levels should be a priority to be  consistently pursued by both sides.

Following the recent privatisation of the Piraeus Port Authority and the visit of Greek Prime Minister Alexis Tsipras to China strenthening Sino-Greek relations, Greece emerges as a bridge between the EU and China.  Do you agree with this view?

The strategic trade relationship that is developing between Greece and China enhances the role of our country within the EU. At the same time, it should not be ignored that Greece and China come closer representing two great civilisations with a rich history over the centuries. The two countries share a common respect for tradition and the impact of the civilisations on modern history.

The bilateral relationship should be driven by coherent action, acknowledgment of mutual interests and a constant search for common fields of commercial activity. The long-term strategy of the Greek government is gradually to lay solid foundations for the present and the future.

Interview given to Mr Konstantinos Papanicolaou