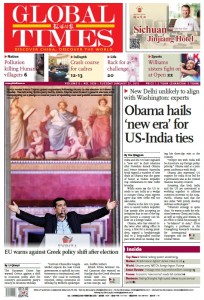 ‘EU warns against Greek policy shift after election’ is the main title of Global Times front-page published on 27 January 2015.  According to the article: ‘The European Union has warned Greece against a shift in economic policy after the country’s anti-austerity party’s victory in elections Monday.”German Chancellor Angela Merkel expects the new Greek government to uphold its commitments to international creditors,” The Local in Germany reported, citing comments on Monday by Merkel’s spokesperson, Steffen Seibert. British Prime Minister David Cameron also warned on Sunday that the Greek elections would raise economic uncertainty across Europe, saying it meant his country had to stick to his plan for Britain’s own economy. European Central Bank (ECB) board member Benoit Coeure told the German business daily Handelsblatt in an interview published on Monday that the ECB would not take part in any debt cut for Greece. IMF chief Christine Lagarde also told Le Monde daily in an interview on Monday that Greece must respect the eurozone’s rules and cannot demand special treatment for its debt in the wake of the victory of Syriza’.