‘Chinese people can offer you their friendship, should you are honest and sincere’ 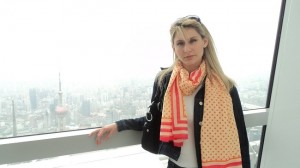 ‘I went for first time to China in 2009 and I felt that it was like a natural environment for me. I guess this happened because of my ability to communicate with the world and my love for the country’, says Christina Alfieri.  Christina is 33 years old. She studied pedagogics at the University of Patras and economics at the Athens University of Business and Economics. Her life, however, started to change when she decided to learn Chinese. In the last two years, Christina is working as an interpreter in both Greece and China.

She started learning Chinese at the Athens University of Business and Economics towards the end of 2005. ‘We were 44 people in the first year in class but only 4 two years later’, she recalls’. ‘I decided to learn Chinese being curious. I could never expect that I would fall in love with this language. Finally, I also used Chinese at the professional level’, she says. In 2009 Christina was awarded her first degree in Chinese (the then HSK BASIC) receiving the highest ranking in Greece. Last year she was awarded the NEW HSK 6 which equals with the Chinese Proficiency. ‘Last year I was the only one who had registered to to take an exam at this level’, she says.

Due to her impressive performance she has received three scholarships from Confucius Institute, South China Normal University (Guangzhou)  and Tsinghua University in Beijing. ‘Teaching is being offered there only in Chinese, including grammar and syntax courses, creative writing and analysis of texts. If students do not participate in the exam or fail, they cannot graduate. The majority of her classmates are from Korea and Japan. Others are Chinese who live abroad while only a few come from Western countries.

‘Chinese people are ready to give their hand, offer their friendship and help, should their counterpart is sincere and honest,’ says Christina. ‘They are very communicative and highly respect the Greek culture and civilization’.