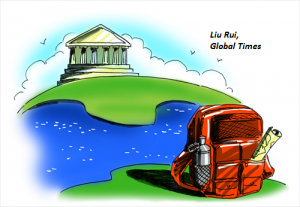 The first half of 2015 has not been ideal for Sino-Greek relations. The initial hesitation of the Greek government to proceed with the privatization of the Piraeus Port Authority seriously affected the bilateral relationship. However, the recent decision of the Greek Asset Development Fund to invite bidders, including COSCO, to submit their offers by September for the 51 percent of the Piraeus Port Authority seems to bring the process back on track.

The success of COSCO in Piraeus since 2009 and its ambition to expand its presence in Greece are the basic pillars of a maritime collaboration that might be further boosted. Traders, companies and countries involved in the process in the last six years have benefited from the transformation of Piraeus into one of the most important hubs in the Mediterranean. More importantly, future plans guarantee more job positions, a higher number of exports, new business deals and sustainable growth.

The Sino-Greek maritime cooperation can also be placed within the context of the revival of the ancient Silk Road Starting from shipping and trade, Beijing and Athens cannot but look into additional ways to increase connectivity. Tourism is perhaps the most characteristic example. China was present for the first time at the celebration of the European Maritime Day which took place in Piraeus this year. But the number of Chinese tourists yearly visiting Greece is just 30,000 as a first destination and 100,000 via other European countries. This number is comparatively low as more than 100 million Chinese tourists visited foreign countries in 2014.

The two countries are currently elaborating on plans to encourage additional Chinese tourists to visit Greece. More direct flights to connect Beijing and Shanghai with Athens will be soon launched, the visa process will be made easier and travel guides will be better trained. According to Ambassador of China to Greece Zou Xiaoli, there are three specific groups of Chinese tourists that might in the coming years select Greece as their destinations. These are honeymooning couples, older people and pupils who can potentially visit Greek islands and archaeological sites and learn more about Greek history and civilization.

A higher number of Chinese tourists visiting Greece will first contribute to the increase of turnover in the national economy. Several Chinese companies are interested in investing in the country in order to combine shopping with tourism. The cruise shipping industry could also benefit. Chinese tourists might either be willing to enjoy local cruises in Greece or even participate in a world cruises with China as their starting point. The “Costa Atlantica” ship, for instance, recently departed from Shanghai and reached Piraeus and Crete. More importantly, this business model can inspire similar projects in the future. That is because many Chinese seaside cities are interested in constructing ports for cruise ships and are looking for European partners.

As long as maritime tourism is bringing China and Greece closer, communication and marketing cooperation can also be expanded. Although Greece is not able to send a significant number of tourists to China due to its small population, it might facilitate the latter’s effort to promote its own landscapes in Europe.

During a Sino-Greek maritime tourism seminar organized in Athens last week, the audience was informed about Hainan Province and the potential delights for tourists travelling to the tropical island. Vice Governor Lu Junhua gave a comprehensive presentation on that occasion, showing relevant videos and pictures. Information was then spread in local media and reproduced not only in Greek but also in English.

All in all, the more the “One Belt, One Road” policy is discussed, the easier it is for involved actors to start new paths of connectivity between continents. Maritime tourism will certainly play a central role toward this direction in an era when the EU is also endeavoring to practically implement its “Blue Growth” strategy.